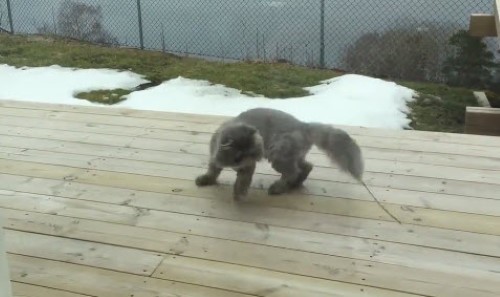 The world can be a rather frightening place for a small animal, although most cats would not admit that they have any fear at all. From time to time, however, they find themselves in situations that not only make them freak out, it makes us laugh. That is the case with this particular cat, who was just outside minding his own business and enjoying a day on the deck.

It seems as if the cat had also found a rather interesting toy, a twig. He was playing with it quite nicely but suddenly, he tries to get up and walk away and the twig gets stuck in his tail! Watching this poor cat chase his tail around frantically is sure to leave you in stitches.

You don’t often see a cat chasing their tail, but dogs seem to do it rather frequently. Aside from the odd twig that may get stuck in a tail, this type of behavior may actually signal a significant problem. In an older dog, it might be time for a visit to the veterinarian but any animal, cats included, can develop behavioral problems and compulsive disorders.