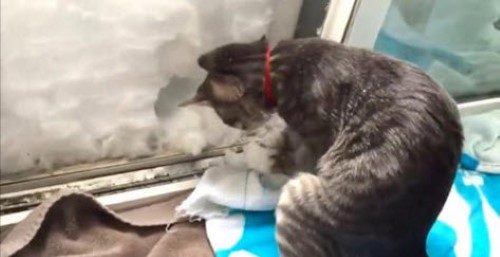 Winter is over and spring is in the air, but that doesn’t mean that you won’t have an occasional snowstorm that blows through your area anyway. During a springtime snowstorm, life can be frustrating because you want to get outside and enjoy some fresh air but as this adorable kitten shows you, a little snow is no reason to stay indoors.

This is Boots the cat, and he is up against a snowdrift that is probably five times as tall as he is. In fact, the snowdrift is keeping him from going anywhere outside, as it is right at the back door. As they say, however, “If there’s a will, there’s a way,” and Boots certainly does have the will.

Rather than retreating indoors and trying to find something else to do, Boots decides that he is going to have a little fun in the snow and he begins carving out his own little igloo. It doesn’t take long before he has something that is just his size, and you will absolutely love watching his excitement as he plays in it. This video sure to make your day.